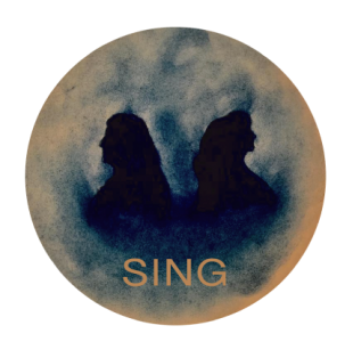 THE STORY ABOUT
THE MERMAID

Once upon a time there was a Mermaid. She lived in her seashell house deep down in the ocean.

Like most other mermaids, she was a member of the Sirens, – the world’s largest mermaid choir. One day, when she was on her way to a choir rehearsal and should meet her friends, she saw something flashing a bit higher up. She decided to swim upwards towards the water surface to see what it was, and when she got closer, she saw that what was glittering were small pearls sewn into a huge fishing net. At the same time, she saw the underside of a boat. Mermaids are curious and playful. She swam right up to the side of the boat and climbed up a bit. Then she saw the fisherman.

The Fisherman sat completely still, smoking his pipe, waiting for his net to be filled with fish. The mermaid thought he was handsome. She looked at him for a while and came to the conclusion that he might be bored. Then she got an idea, and started thinking that she would cheer him up, when he would have to just sit there for a long time. And so she started singing.

The Fisherman first got terrified, as he had not at all noticed the Mermaid. But in the next moment he thought that she was singing beautifully. As beautifully as he had never heard anyone sing before. The Mermaid saw that the fisherman became touched, so she just sang louder and louder. Between the songs they began to talk, and soon they started joking and laughing. The mermaid swam around the boat, down under it and up on the other side. Occasionally she even sprayed water on him.

Nobody knows exactly what happened, but suddenly she was caught by the fisherman’s net. At first she got scared, and then she got sad. She started wondering what to do to get back to freedom. Then she remembered what she had learnt in the Mermaid School when she was still a child. And inside herself she asked the Ancient Wisdom for Mermaids for help. After a while the Ancient Wisdom for Mermaids replied that the Mermaid herself had to figure out how to get back to freedom. But there was a rule she would have to follow: “It is strictly forbidden to use knives, scissors, swords or any other sharp objects. You must escape the net without destroying either the Fisherman, the net, the boat or yourself.”

Fortunately, it was an exceptionally large net, and strangely enough, it was not at all heavy in the water. The mermaid was strong, and a very skilled swimmer, so she started swimming inside the net, pulling it with her as far as she could. When she could not pull the net any further, she swam back up to the water surface.

Then she saw the Fisherman sitting in his boat far away. He sat completely still, smoking his pipe, waiting for his net to be filled with fish. She still thought he was handsome, and she still liked him very much. At the same time, she wanted her freedom back.

The Mermaid wondered for a while, and then she came up with that if one has happened to swim into a net and get caught, one necessarily must be able to get out again the same way. So she started swimming back to the fisherman’s boat inside the net, found the opening, and slipped out from the net the same way she by mistake had happened to enter it. And so, she got her freedom back, even more glorious than ever before.

And almost every morning ever since then, the mermaid swam out to see the fisherman before she went for the choir rehearsals with the Sirens. 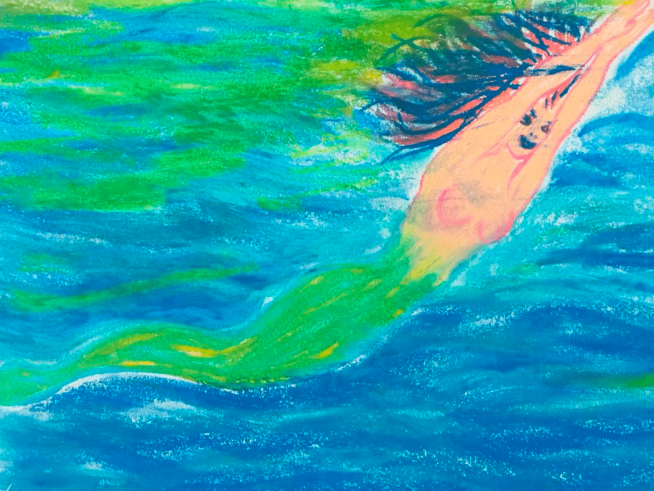 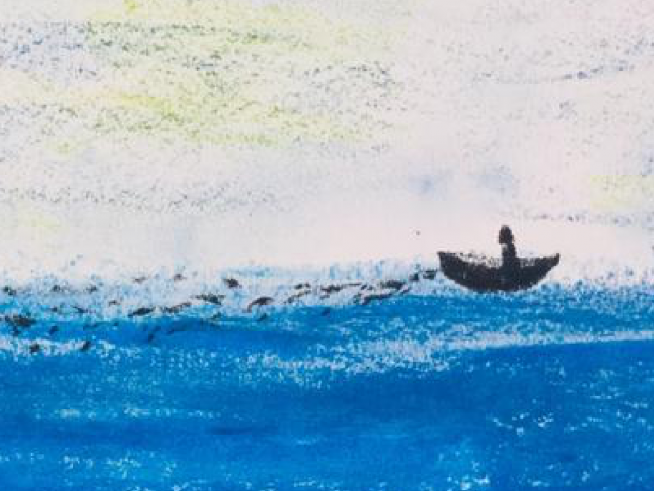 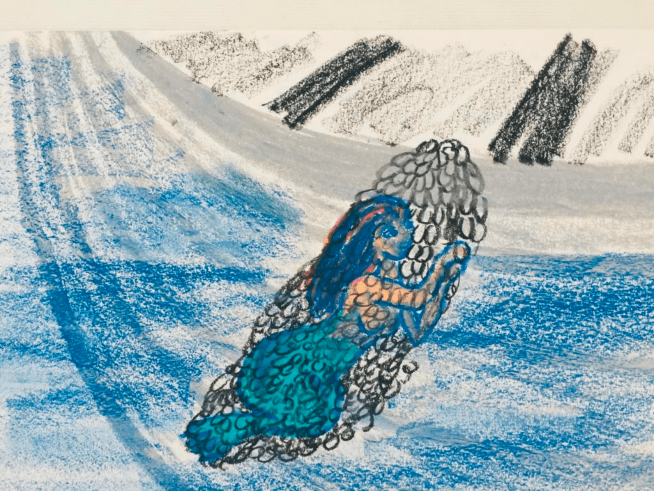 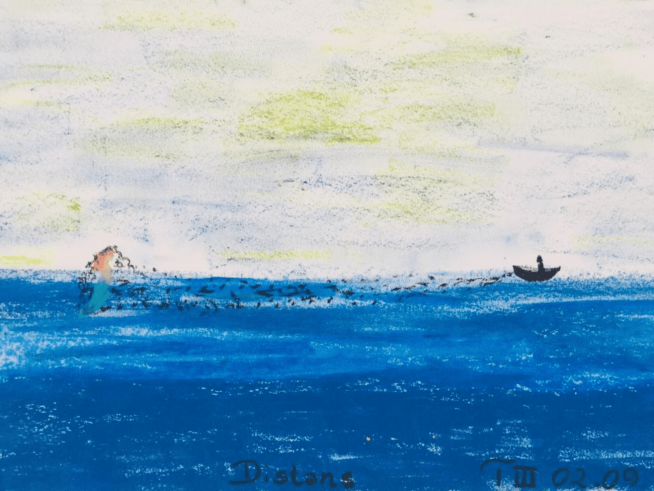 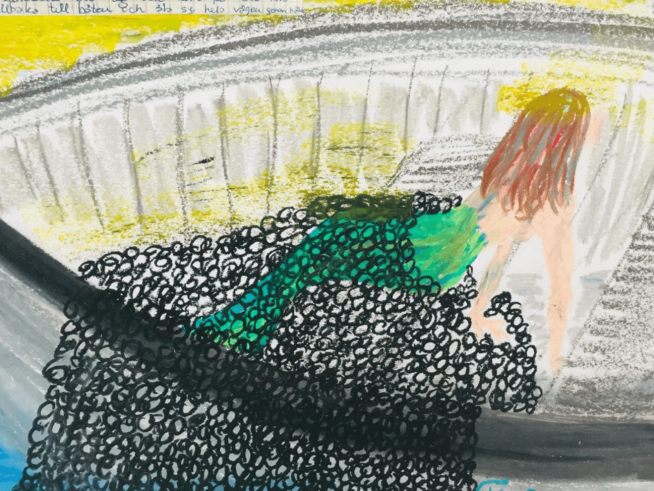 THE TALE OF THE SQUIRREL CHILD

Sometimes he told her about the time when he was young and did all kinds of things than just sitting still, smoking his pipe, waiting for the fish to fill his nets. He told her about all the countries he had been to, all the languages he had learned, and the people he had met. One day he told a story that he had made up himself.

Once upon a time there was a squirrel family with a squirrel mother and four little squirrel children. Three of them were kind and polite, obeying to what their mother told them. But the fourth squirrel child was different. He just couldn’t sit still and found all sorts of funny things to do. One morning, like any other morning, the squirrel mother told her children to be kind and polite and to not do anything that could be dangerous. And so, she went out to find food for her children.

The three little polite squirrel children began playing with their squirrel teddies. But the fourth squirrel child thought it was a bit too boring. As many times before, he happened to forget that mother had told them to not do anything that could be dangerous – or then, he did not understand what she really meant. However, he went to the forest.

He enjoyed being among the tall trees in the woods, jumping on and on, from one tree to another. He said to himself: ”This is the World”.

He went on like this for hours, and stopping at times, snitching a nut from a bush, or teasing a bird mother laying on her eggs. But eventually, he became tired and began longing home to the squirrel nest and his comfy, warm, soft bed.

Suddenly, the World was TOO big, and he wanted home so badly. He jumped to the tree where he came from, but could not find the tree he had jumped from before that. He stopped in this tree and started crying.

High above in the air, a big eagle was flying. Eagles have very good sight, even at great distance. Therefore, it did not take long before he saw the squirrel child sitting all alone in the tree, crying. Since he was so high up, he could see many kilometres of the forest at once. He flew around in circles for a while. Then his eyes spotted the squirrel nest and the squirrel mother and the three squirrel children, who were running around, looking and calling for their sibling. The eagle understood what had happened: the squirrel child had jumped his way and gotten lost, and couldn’t find his way back home.

Later, the squirrel child often thought of the Eagle, and when he became an adult and had children of his own, he never forgot how the Eagle had once saved him.

< Back to The Mountain 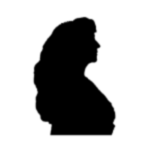